"Where is the emissions sticker required?" Print

Numerous German cities have established or announced low emission zones to reduce pollution in their inner cities. Vehicles with particularly poor exhaust emission values, such as older diesel vehicles without a particle reduction system (particulate filter) and vehicles with petrol engines without sophisticated exhaust gas purification (regulated catalytic converter), are not allowed to drive into the environmental zones.

The areas polluted with particulate matter are marked with the traffic sign "Umweltzone". An additional sign regulates which vehicles with which stickers are allowed to drive in the low emission zone. 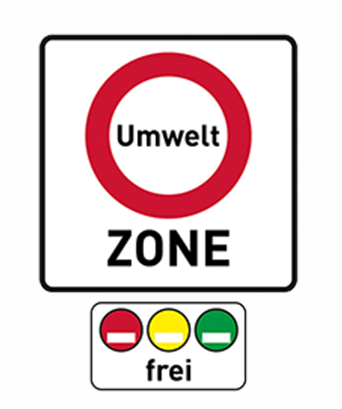 Initially, the driving ban applied only to vehicles without a sticker or with a red sticker. In the meantime, only low-emission vehicles or motor vehicles (KFZ) with special rights are allowed to drive in the designated zones.

Driving into an environmental zone without a valid emissions sticker or special permit is an administrative offence that has been punishable by a fine of € 80 since 1 May 2014.

Did you find it helpful? Yes No

Send feedback
Sorry we couldn't be helpful. Help us improve this article with your feedback.